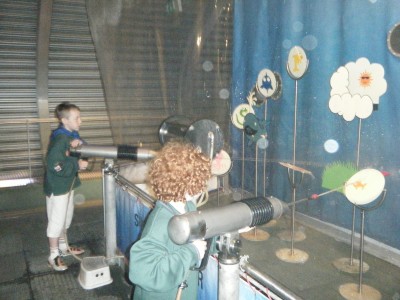 The 18th of June at 8.45am cubs and leaders from Goyt district met at Rose Hill train station to catch the coaches to Rotherham and the Magna. After a few games of I-spy we arrived at Magna at about 10.30 and excited to start the day.

After a quick safety briefing of don’t run because the floors are hard and will hurt if you fall on them, we were allowed to start exploring the museum. There is four parts to the museum, Earth, Fire, Water and Air.

Arkwright started at the water section. The first section of this area was some displays telling us how much water is used around the world and what it is used for. However, round the corner was the most exciting part of this exhibit, the place where we got to play with water!! There was giant water guns that shot targets and a place to have a shower. In the middle of the room was a big island with water in and different ways of moving water up and down hill as well as demonstrations of wave power and water wheels. Obviously most of the cubs got a bit wet! After the water area, we headed upstairs to the air section. This section was disguised as a large airship and could only be got to by crossing a bridge that was over a very very big drop. Once inside side there were displays of what air can do, including a real life tornado. There was also one hands on display that showed how the frequency in the air can affect object. From air it was onto Fire. The main attraction here was the fire tornado, that was amazing! There were some other displays including heating up metal wires and seeing them expand with heat as well as melting some iron. There was also the opportunity to put fireman gear on. We then watched the Big Melt, a show that explained how the old steel works used to work. Then it was time for lunch because everyone was starving! After lunch we headed to Earth. This started of with looking at what lived in the earth, things like worms and ants. We then got to go through some little tunnels. Further round was a quarry complete with blasting, conveyor belts that shifted rocks and diggers to dig stuff. The cubs loved this area and would have stayed all afternoon digging on the diggers and moving small rocks from one side of the room to other with their little wheel barrows and hard-hats. Eventually the leaders got bored and wanted some day light after being inside a dark building all day. So we managed to drag them away and to the gift shop where they all spent some money on little mementos. Then we finally got outside to a water play area and a more traditional playground, where the cubs spent the rest of the day playing (and some of the leaders too!).